Scaling up Climate Smart Agriculture: who will benefit?

Dr Marije Schaafsma is the University of Southampton’s thematic cluster pathway coordinator of the Sustainability, Environment and Resilience pathway of the SCDTP. She is an environmental economist and is interested in decisions concerning ecosystem management and human development. She specialises in the application of economic methods to inform such decisions and trade-offs, and her recent work focuses primarily on Sub-Saharan Africa and Mexico.

In January, ESPA invited me to present the results of a report synthesising evidence for the contribution of climate smart agriculture to poverty alleviation. The workshops in Kenya and Malawi involved stakeholders from the country teams of EBAFOSA– the Ecosystem Based Adaptation for Food Security Assembly.

Our synthesis suggests that scaling up climate smart agriculture would probably work best (in terms of larger scale) with commodities that would attract interest of private sector. However, such commodity value chains are often not accessible for the most vulnerable, who lack land, transport and other means to participate in this trade. As such, scaling up climate smart agriculture may fail to ‘leave no one behind’, in the spirit of the Sustainable Development Goals.

The meetings in Kenya and Malawi brought some interesting questions to the fore: there was a shared sense that climate smart technologies exist, but that knowledge has to be synthesised and spread in each country. However, relatively little discussion focussed on how to involve the most vulnerable in it due to the focus on quick success that NGO financing mechanisms force? Or to silos in which governments, experts and NGOs operate? Or the fact that many smallholder farmers are ‘poor’ to begin with? And should (climate-smart) agriculture be inclusive, or should other welfare instruments, such as social benefits, take care of the most vulnerable people? 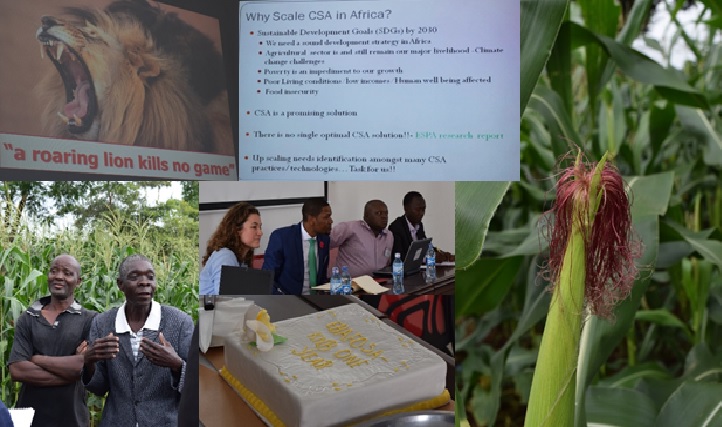 In both countries, the need to involve agricultural extension officers (in charge of delivering information about agricultural practices to farmers) in raising awareness of climate-smart practices was high on the priority lists. But there are so many changes that go against decades of ‘traditions’ in farming (parentheses added because of the political forces that drove ridging practices). How to change practices from ridging all land for maize cropping, to irrigation in the wet season (insufficient rain) or multi-cropping for resilience and food security? How to adapt prescriptive, rigid methods to flexible, place-based and modern approaches in countries where rural youth may soon create labour shortages?

Finally, the question was posed – should upscaling be based on farmers’ needs, or on where ‘experts’ or ‘leaders’ think that they ought to go in the face of climate change and other social-ecological drivers? Leading by example may be better than just talking, but it is not sufficient – how can one stimulate more widespread adoption, beyond the lead farmer along the road? This ties in with some of the pushback from civil society organisations, trying to empower smallholder farmers.