Finding the thread: Reflections on our second day in Reykjavik

Come along with us on our trip to Iceland by following our daily blog, today’s entry is by Shaun Williams and Philippa Broadbent.

We started our second full day in Reykjavik with a visit to the National Queer Organisation of Iceland.  We were met by Heiðrún, the office manager, who provided us with coffee and a wealth of information about the organisation’s mission to ensure that queer people are visible, respected, and have full rights within Icelandic society. Heiðrún told us about the education and outreach programmes, and also discussed a new bill to enhance the rights of transgender and intersex people in Iceland.

After lunch, we walked a short distance across the street to the headquarters of the National Youth Council.  Two members of the youth council presented one of their projects which promoted youth political participation by facilitating shadow elections in upper secondary schools.  This project was undertaken following low youth voter turnout in the 2014 election and the increased 18-19-year-old youth voter turnout in 2017 and 2018 elections may be partially attributed to the project’s positive effects.

Next, we journeyed across Reykjavik to the University of Iceland, taking in the stunning views of the city on the walk. We met with two academics at the university, one of whom was also on the Icelandic Science and Technology Council.  They discussed the University of Iceland’s strategy for 2016 to 2021.  ‘Active participation in society and industry’ was named as one of three key pillars in the strategy, given equal weight with research and teaching.  This third pillar sought to enhance circulation of information between academics, the public, and policymakers via open lectures, outreach with schools, and use of digital platforms such as YouTube. 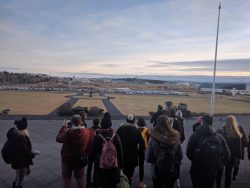 The day concluded with a presentation from the United Nations University Gender Equality Studies training programme which was established in 2009, and last year had 25 students from developing and post-conflict countries including Palestine and Uganda.  Impressively, 48% of final projects from this course had been partially implemented in the student’s home country and 14% had been implemented in their entirety.  After the meeting, one of the presenters who has recently completed his PhD offered us his business card for possible future collaborations with SCDTP researchers.

Day two in a ball of wool…

After reflecting on our diverse experiences today, a common theme (or thread…) unravels: All the organisations stressed the importance of engaging communication for real-world impact.  We hope to knit this thread into our future research careers by effectively interacting with the public, policymakers, and particularly groups who might benefit from our research.

Although we haven’t been able to get into all the knitty-gritty of today’s adventures and tie up all the loose ends in this short blog, we hope that we’ve weaved a colourful jumper of the day.