Dr Annabel Tremlett, one of the SCDTP’s Thematic Cluster Pathway coordinators (Population Change, Health and Wellbeing) has just opened an exhibition as part of a British Academy funded project to challenge common stereotypes of Roma, Gypsy and Traveller people.  This exhibition of photographs, which is free to attend,  is taking place in the basement of Portsmouth Guildhall between Thursday 22 November and Friday 21 December.  For more details please see http://uopnews.port.ac.uk/2018/11/13/exhibition-challenging-stereotypes-of-roma-gypsy-and-traveller-people/

The prejudice experienced by the Roma, Gypsy and Traveller communities is often called the last acceptable form of racism. Imagery plays a crucial role in circulating these attitudes – just think of the images that stick in people’s minds about these communities, from the 19th century exoticised, sexualised, devastatingly tragic figure of Carmen (from Bizet’s opera), to the glitzy 21st century TV show Big Fat Gypsy Weddings (Channel 4). These communities are either shown as the ‘noble savage’ (seductive, free, primitive) or the ‘bogeyman’ (criminalised, backward, parasitic). So what are the alternatives? What if Roma, Gypsy and Traveller people themselves became the image-makers?

Drawing on years of experience of everyday life with Roma communities in Hungary, including many photographs taken by Roma people themselves, Dr Annabel Tremlett and Dr Sanna Nissinen from University of Portsmouth and John Oates from the Open University have joined forces (with funding from the British Academy/Leverhulme Trust) to investigate ways to challenge stereotypes. Along with displaying images from their own research, the researchers have also been gathering fantastic examples of anti-racism campaigns and projects from Roma, Gypsy and Traveller organisations and independent photographers. These will be show-cased in a unique exhibition to be held at Portsmouth Guildhall from November 22nd to December 21st 2018.

One of the main findings so far (the project runs until August 2019) is that to break down stereotypes we need engagement – thinking of people not just as others but as ourselves, looking at how we connect with each other, our shared histories, identities and experiences. This can be done visually, and our project has found three interesting ways:

Images from a series called Black Blood by British photographer Tom Roche will be exhibited.  This is a documentary photography project investigating his journey of discovery into his personal Romani heritage. 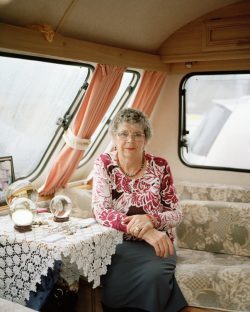 Images from the portraiture series called Roma Body Politics confronts viewers with common and exaggerated stereotypes of Roma through the use of satire. 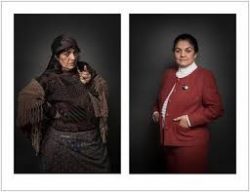 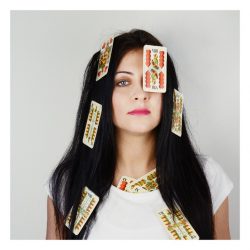 The Traveller Movement have also contributed images from their ‘Operation Vote’ campaign (which showcases ordinary Gypsy, Roma and Traveller people and their professions), whilst the London Gypsies and Traveller organisation have lent us huge portraits from their campaign #weareallsomanythings. We also don’t forget that Portsmouth itself is a city that has many Traveller and Romani families at the heart of its community and histories – for this exhibition we are very pleased to have the permission to show photos and stories from the family of one of Portsmouth’s most famous boxers, Johny Smith. Who hasn’t yet listened to or read the stories of Damian Le Bas’ family in Hampshire and beyond need to do so to understand how Travellers and Gypsies are an intrinsic part of our shared histories and identities. Damian Le Bas’ book The Stopping Places, (published by Penguin Books 2018) was featured as BBC Radio 4’s Book of the Week in June 2018

Photographic works and campaigns will be displayed at the exhibition in the Portsmouth Guildhall Basement Gallery alongside ‘everyday’ images from academic research projects. The exhibition will run from 22 November – 21 December 2018 with a public event on 22 November from 5-7pm (all free entry). The exhibition will run alongside teaching sessions with students from the universities of Portsmouth, Brighton and Southampton, and is part of a wider movement of using photography projects to expand the narratives, provide greater understanding and offer more balanced representation of these marginalised groups of people.

During the opening event there will be a talk by exhibition organisers, photographer Tom Roche along with the Traveller Movement who will speak of their campaigns to end racism against Roma, Gypsy and Traveller people. There will also be a screening of the award-winning film Vortex, a rare insight into Roma communities struggling to survive in desperate poverty in Eastern Hungary. Producer: Pál Sándor, filmmakers John Oates and Csaba Szekeres, Hunnia FilmStudio, Budapest.

We invite the student community and wider public to engage with this research and think about a better future for us all. For more information click here.