Mihaela Iorga is a third-year PhD student in the School of Languages and Applied Linguistics, at the University of Portsmouth. She submitted her thesis in November 2022 and is preparing to defend it in March 2023. Her academic interests include corpus linguistics and foreign languages and politics, particularly surrounding migrants and migration in the context of the Brexit phenomenon in Europe. Her thesis, entitled ‘‘A longitudinal comparison of the representation of migrants and the EU in a corpus of British and Romanian newspaper articles published between 2006 and 2018’ diachronically compares the conceptualisation of migrants and the EU in the British versus the Romanian press between the years 2006 and 2018. 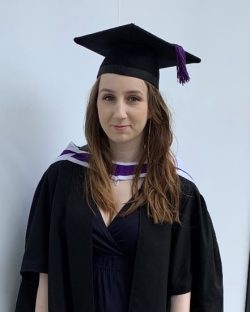 The increasing size of migration flows at a global level has contributed to migration becoming a salient topic of interest at the local, national and international levels. Although exact numbers are unavailable, the International Organization for Migration estimates that there are currently over 272 million migrants in the world (International Organization for Migration [IOM], 2019). Considering recent events, such as Russia’s invasion of Ukraine, the number of migrants is expected to continue rising. In academia, the scale of this global phenomenon is anticipated to result in an increase in studies on migrant representations, through discourse analysis. An example of such a study exploring migrant conceptualisations is the one I conducted as part of my PhD, analysing the press’ usage of conceptual metaphors, such as MIGRANTS ARE ENEMIES, and their impact on the migrants in the Romanian and the British landscapes.

In exploring this topic, my project employs a multidisciplinary approach to the study of migrant representations, combining elements from the linguistics, politics and history fields. Specifically, my study compares the conceptualisation of migrants in Romania, a country characterised by emigration, with that in Britain, now a country of immigration. Here, it is worth clarifying that a country characterised by emigration is one where the number of people emigrating from said country exceeds the number of people immigrating to it. Such is the case of Romania, where 234,000 emigrants were registered in January 2019, as compared to 202,000 immigrants (Tarchi et al., 2021, p.50). These immigrants joined the Romanian diaspora in other EU countries, now comprising over 2.9 million Romanians, thus indicating that over 15% of Romania’s total population relocated outside of Romania (Heinikoski, 2017, p.3). In contrast, an immigrating country is one where the number of immigrants settling in it is larger than the number of individuals emigrating out of it. One example of a country characterised by immigration is the United Kingdom, where 715,000 immigrants were registered, compared to 403,000 emigrants (just over 1.2% of the country’s population), between April 2019 and March 2020 (Sturge, 2022). These figures indicate a significant discrepancy between the Romanian and the British immigrant communities residing in EU nations (Office for National Statistics [ONS], 2018). This discrepancy is relevant, as my thesis is concerned not only with migrant representations per se, but also with the relationship between different socio-political factors and these migrant conceptualisations in Britain and Romania, two countries with opposite migration flows.

To further explore these portrayals, I carried out a Critical Discourse Analysis (CDA) of six British newspapers (The Guardian, the Daily Mirror, the Independent, the Daily Mail, The Times and The Sun) and three Romanian ones [Evenimentul Zilei (“The Event of the Day”), Adevărul (“The Truth”) and România Liberă (“The Free Romania”), published between 1st January 2006 and 31st December 2018. In answering the overarching research question (Q1), I identify and discuss the main patterns in these migrant conceptualisations during that timeframe. Whilst doing so, I also focus on whether other social, political, or economic factors, such as Britain and Romania’s opposite migration flows and their different economic and political backgrounds, are connected to the changes in these representations (Q3). I also explore the representation of migrants, through conceptual metaphors, in the Romanian and the British press (Q2). Finally, I analyse the diachronic changes in the portrayals of migrants and the EU in Romania and in Britain (Q3). This blog discusses the findings I have identified particularly in relation to Q2, thus critically exploring, through a Conceptual Metaphor analysis, some of the metaphors employed by the press in Romania and in the UK to portray migrants. According to Lakoff and Johnson (1980), conceptual metaphors are a mapping between one abstract semantic domain, namely the target domain, and one more concrete semantic domain, i.e., the source domain. Metaphors are therefore tools for describing one entity through another “without explicitly stating a likeness” (Bloor & Bloor, 2007, p.69).

Exploring these conceptualisations is a salient task, as to the best of my knowledge, no such study exists currently, employing the triangulation of qualitative and quantitative tools to comparatively analyse the diachronic representations of both migrants and the EU in these two countries. In exploring these, one of the original elements of my project was the study of the Romanian press environment, which is an under researched topic, compared to its British counterpart. In addition to this, the novelty of this project also lies in its engagement with the ways in which a country of emigration, rather than one of immigration conceptualises people’s mobility.

The analysis showed that the main groups of migrants the press in both countries reported on are asylum seekers and refugees, Muslims, non-Roma and Roma Romanian immigrants. Through conceptual metaphors, these migrants were compared to objects, ships, illegal goods, waves, flows, liquids, invaders, enemies and threats. The most commonly identified metaphors relating to migrants include MIGRANTS ARE OBJECTS, MIGRANTS ARE A WAVE, MIGRANTS ARE A FLOW OF WATER and MIGRANTS ARE INVADERS/ENEMIES. These portrayals occurred in both countries during the same four main political and economic events, including Romania’s and Bulgaria’s accessions to the EU between 2006 and 2007, the financial crisis of 2007-2008, the European refugee crisis in the mid-2010s and the Brexit referendum and its aftermath, covering the years 2016 to 2018.

In analysing these portrayals, I have found that, despite being two countries with opposite migration patterns, Romania and Britain largely conceptualised migrants similarly, in a negative manner. Precisely, the quantification, dehumanisation and ‘Otherisation’ (Holliday, 2011) of migrants was found in articles from both countries, portraying migrants as separate communities amongst their destination countries. According to Holliday, ‘Otherising’ migrants refers to “constructing, or imagining a demonised image of ‘them’, or the ‘Other’, which supports an idealised image of ‘Us’, or the ‘Self’” (2011, p.72). Such images can be constructed and propagated through media discourse, which influences society and which shapes, over time, our understanding and experiences of the world (Mayr, 2008).

Such instances of ‘Otherisation’ were found, for example, in the discussion of the MIGRANTS ARE OBJECTS metaphor, where I argued that the Romanian press linked Muslim immigrants to terrorism, particularly due to their religious backgrounds. On the other hand, the British press did not engage in such associations, likely in an attempt to avoid being accused of Islamophobia. In fact, the only migrant groups the British press directly named are Romanian and Bulgarian individuals, who were linked to crime, through the MIGRANTS ARE ENEMIES and MIGRANTS ARE A WAVE metaphor, throughout 2006 to 2018. These conceptualisations of Romanian immigrants also applied to the Roma Romanian community, whom the Romanian press did not attempt to defend. Instead, the Romanian press contributed to the propagation of populist, anti-Roma discourse, perpetuating the discrimination of the Roma in Romanian society, through metaphors such as MIGRANTS ARE A WAVE.

In Britain, the anti-migrant portrayals present in the press, propagated to an extent through the press’ attempts to maintain the socio-political status quo, influenced the voters’ choice in the Brexit referendum. Therefore, one striking finding I have put across is that there is a strong correlation between the representations of migrants and that of the EU in EU member states. Through media discourse, migrant and EU conceptualisations influence one another, whilst also shaping the audience’s views, over time.

Overall, the negative representations of immigrants in both Romania and Britain were strongly linked to economic and political motivations, such as the countries’ economic concerns regarding the consequences of welcoming immigrants, as well as sociological worries linked, for example, to the immigrants’ religious backgrounds. As a consequence of these portrayals, the term ‘migrant’ became a “dirty” word, with a now negative discourse prosody, rather than a neutral one. 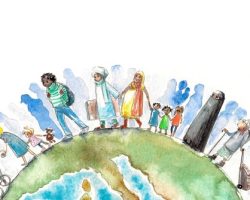