Dr Silke Roth is an Associate Professor in Sociology at the University of Southampton, and the Southampton Thematic Cluster Pathway Coordinator for Citizenship, Governance and Security. This blog was written following a teach-out facilitated by the author, and first appeared at: http://southampton.web.ucu.org.uk/2018/03/15/how-digital-communication-transformed-activism/

For the ongoing USS-Strike to defend our pensions, digital communication on e-mail and social media have played a tremendous role. In fact, in contemporary society it seems almost unthinkable that social movements were able to mobilise protest events without access to the internet. It seems useful to appraise how activism has changed since the advent of social media. 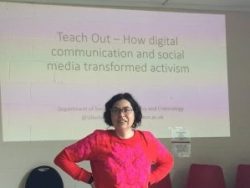 I begin by reviewing some of the main tasks of social movements. First, social movements are engaged in framing processes: they need to convince people that there is a problem and what the problem is, who is responsible for the problem and what should be done about it. In the case of the the current dispute, the problems are the proposed changes to pensions and the way the pensions are regulated.  UUK and The Pension Regulator are responsible. One tactic is strike action.

Second, social movements need to mobilise resources including people (supporters, activists, and leaders), access to meeting spaces, media and money and enlist support from the wider public, decision makers such as politicians, and experts. In the context of the USS strike, this requires mobilizing members to come to the picket lines.

Finally, social movements need to make decisions about tactics and strategies as well as about their organisational structures and decision making. For the strike for USS that includes decisions to continue or to suspend the strike, and the pursuit of alternative and/or additional tactics.

Digital communication and social media have made some of these tasks much easier, but have made others more complicated. It is possible

to distinguish internet-supported and internet-based repertoires of action. Internet-supported actions are a continuity of previous forms of mobilisation – instead of handing out leaflets or contacting people via a telephone-tree cascade system, meetings or protest events are announced via websites, on e-mail or via social media. There is no offline equivalent for a hashtag-campaign on social media – this is an example of new internet-based activism.

So how are online- and offline activism related? Some are concerned that online activism decreases the involvement in offline activism and leads to slacktivism or clicktivism. However, others believe that digital prefigurative participation or engaging with an issue online through social media leads to participation in offline protest events. Collective action is based on collective identity (for example, as trade unionists) and organisational structures (for example, the UCU branch), but digitally-enabled activism can  produce connective action which is networked and may not be tied to collective identities, organisational structures and leaders. In the current dispute we can see that hybrid forms of action exist.

In her book, Twitter and Teargas Zeynep Tufekci brilliantly analyses the ‘power and fragility of networked protest’. The power might be quite obvious. When social movements are ignored by the mass media (see for example the lack of mainstream press coverage of the USS-strike) or are censored, digital communication allows the spread of information and can enable citizen journalism.

In 1999, Indymedia was created by independent journalists and activists in the context of the WTO protests in Seattle. Although the website still exists nearly twenty years later, including regional sites in many languages, today Indymedia is hardly known. It has been replaced by the behemoths Twitter and Facebook on which citizen journalism as well as fake news are disseminated. We also see that mass media and social media are not mutually exclusive;  articles and broadcast news media are frequently posted on social media. In addition, not everyone’s tweet or post gets shared, some have far more influence in the digital public sphere than others. Communication on social media raises important questions of verification, and representativeness.

Tufekci also discusses the impact of digital communication on the leadership, logistics and infrastructure of social movements. New communication technologies allow the kinds of quick dissemination which made the occupation of Gezi Park, Tahir Square and the Occupy camps possible. In contrast, the American civil rights movement required meticulous and lengthy organising over long time-periods. Slow dissemination allowed for capacity building over a longer time-period which created space for extensive discussions outside the public eye – for example concerning tactical shifts, and social movement organisations had a central role in providing an infrastructure for the decision making processes and dealing with dissent and conflict arising from these debates.

In contrast, Tufekci demonstrates how digitally mobilised movements can experience a ‘tactical freeze’ due to the lack of decision-making structures. Connective action is less well placed to deal with disagreement and building trust. Debates are played out publically, and while open debate might be welcome, it can be dominated by a few, prominent, but not necessarily representative voices. Moreover, discussing tactics openly  can signal to opponents where the breaking points in the movement are. 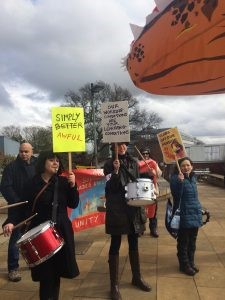 The USS strike has undoubtedly benefited from the existence of social media. While we stood in cold, snow and rain, it was inspiring to know that the picket lines were strong at Universities across the country. Moreover, social media enabled activists to crowd-source information about management practices at the institutions involved in the dispute, and to share information to support the protest. Petitions were circulated and signed, universities were named and shamed. Activists skilfully employed not just open digital spaces but also closed spaces which allowed for strategizing outside the public attention.

One important feature of social media use was the mobilisation of humour to support the strike.  Our own #DinosaurOfSolidarity (@of_dinosaur) has quickly gained 1950 followers (and counting) for example. But social media has also carried serious messages. The outcome of UCU/UUK consultations immediately resulted in the hashtag #NoCapitulation which perhaps influenced the swift rejection of this offer.

The question is – what next? How can we prevent a ‘tactical freeze’? It is clear that offline and online activism are intertwined and that the affordances of digital communication are invaluable. We need to consider whether the velocity of digital communication undermines careful strategic decision-making. And how online and offline resources can be used to ensure democratic and inclusive debate. Some things might not be best discussed online, and we may need to learn a ‘digital hygiene’ i.e. knowing when and what to tweet. However we move forward it is clear that movement building in digital times requires solidarity and respect.