Come along with us on our trip to Iceland by following our daily blog, today’s entry is by Kate Harrison and Mair Thomas.

Advertised as a ‘One-day Delight’ in the hotels free travel guide… yes, we are still students nabbing those freebies… we parked our academic brains and spent our final full day adopting our tourist hats to traveling the Golden Circle!

Having bagged ourselves a personal tour bus, we started our journey by heading to an Icelandic tomato farm, Fridheimar, responsible for 18% of Iceland’s tomato market- who even know Iceland had the capacity to grow tomatoes?! Apparently, we have a swarm of Dutch bumblebees to thank for it! We heard about how they grow tomatoes without pesticides in greenhouses heated by Iceland’s geothermal hot water. Some even tried some tomato themed drinks, including a surprisingly nice tomato and strawberry latte!

Next was Iceland’s most renowned tourist spot, the Geysir, which is actually 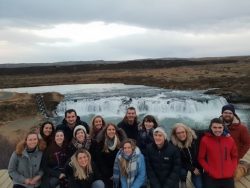 the original after which all other Geysirs are now named. Fun fact for you, it literally translates as ‘gusher’. Although, despite its celebrity status, it was in actual fact its neighbouring geysir Strokkur which provided us with the entertainment and show-off water show (after an incredibly cold wait- it is safe to s ay they don’t perform on cue)!

We then headed to the infamous Gullfoss waterfall. A spectacular double cascade waterfall with a drop of 32m! The DTP’s geographers were able to teach us how the movement of glaciers and ice sheets had created the amazing landscape. The wind was particularly strong around this waterfall, so we were fighting to keep upright, however the view was worth the cold!

Site known as þingvellir National Park, where the Viking settlers established the first democratic parliament in AD 390. This now overlooks the summer residence of our friend, the President of Iceland. A frozen waterfall en route was amazing to see, with many of us citing it as the highlight of the day! A diverse yet harsh landscape, it was really incredible to experience and travel through the rift valley created by the North American and Eurasian tectonic plates.

To top the day off and conclude our amazing trip to Iceland, Viktor’s wonderful family invited the motley crew into their home for a fine feast! With traditional Icelandic lamb and nut roast it is safe to say we ate like the Vikings! A much welcome meal after the majority of us have lived off smuggled hotel sandwiches made from the breakfast buffet. We shared beer named after a song written by Viktor’s parents’ punk band, which was so badly poured by Shaun that Glenn had to take over as full time barman. And of course, we cannot forget the entertainment that was provided by Viktor’s family’s musical interludes! A fabulous night of frivolities and laughter!

Viktor- thank you for such a fine end to our stay in your beautiful country!