Day 3: Past, Present and Future Challenges

Come along with us on our trip to Iceland by following our daily blog, today’s entry is by Alice Oliver and Matt Smith. 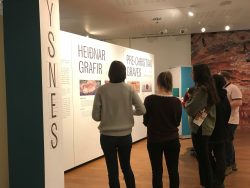 Today was one action packed journey of events. To kick it all off it we immersed ourselves within a sea of Icelandic history and heritage at the National Museum of Iceland. We travelled back through time to where it all began for the first Norwegian settlers in 800 AD. Some of us used the ‘Rainbow Threads’ guide to learn about the queer history of Iceland, and the difficulty in tracing this historically invisible population.

Next, we ventured through Reykjavik’s musical park to the British Embassy where we were warmly welcomed by the Deputy Head of Mission with McVities biscuits and chocolate fingers. Paul Begley spoke of the Embassy’s top four priorities which focused around nourishing the bilateral relationship between the two Atlantic neighbours. Questions flew around the room concerning matters large (Brexit) and small (best beer in town). Despite our uncertain future, we were reassured that whatever the Brexit outcome, our positive and strong relations with Iceland will continue. If you happen to embark on an Icelandic adventure, Britons, do follow the UK in Iceland Facebook page to receive important advice and guidance from our British Embassy.

We battled with all our might through the bitter North Atlantic winds to the University of Iceland. Scribbling pens and reflective conversations ensued as we met a diverse scholarly panel from Political Sciences, Distance Education, Civil Engineering, Psychology, Environmental Studies, Information Science, Linguistics as well as a Gay Rights historian. Discussions centred around the buzz words impact, collaboration and communication. Specifically concerning the ways in which scholars engage with wider audiences in the Icelandic context. 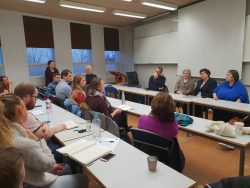 Striding almost horizontally once more, we nestled in for the evening at a Pub Panel of Icelandic MPs. The panel included five individuals representing the Social Democrats, Independence, Pirate, Liberal Reform and Left Green party’s. Ourselves and the MP’s engaged in a heated but never stormy debate on the most prominent issues; from the divisions within Icelandic politics to the great challenges the country will have to deal with in the future.