Viktor Valgardsson is an SCDTP-funded PhD candidate in the Department of Politics and International Relations in the University of Southampton. His PhD research focuses on turnout decline in Western Europe and his other research interests relate to democratic developments, reforms and theory more broadly.

We went to South Africa this summer! From June 27th to July 6th 2018, the SCDTP took a group of us PhD students on their scholarship programme to Johannesburg, to work with academics from the University of Johannesburg (UJ) and University of the Witwatersrand (Wits) – and to get to know the city, its people and its remarkable history. 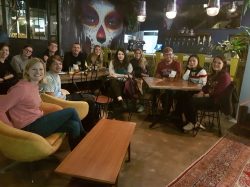 The group together at a Mexican restaurant in our first evening in Johannesburg!

We started by settling in and resting a bit after the 11 hour flight (which was made more bearable through Jumanji) and had our first dinner at a nice Mexican restaurant near the hotel (and watched a decidedly boring England-Belgium game in the World Cup). The next day, we  visited UJ in the morning and got to know the academics that would be working with us; brilliant people from South Africa and neighbouring countries researching similar subject areas in very different contexts. After presenting our PhD research to each other, we split into groups and were let loose to work on mutual research projects during our time there. 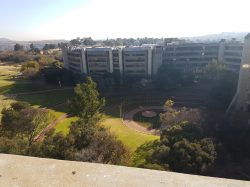 Part of the beautiful University of Johannesburg campus!

After finding some common ground in our diverse research interests and coming up with different project plans, we had some time over the weekend to explore the historic area around us – an environment very different from what we are used to on the south coast of England. We went out for lovely dinner on the Friday and explored the nightlife a bit, before visiting the Cradle of Humankind and the Sterkfontein Cave on Saturday – a fascinating museum and archaeological site where some of the earliest remains of homo sapiens have been discovered. 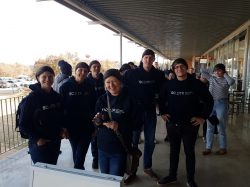 Outside Sterkfontein cave, getting ready to dive in!

On Sunday, we visited the Arts on Main street market, bargained for some lovely native art-work and had great street food before going to visit the Otamendi Children‘s Home in the Soweto neighbourhood in the city. On the way we bought some food, toys and supplies to bring to the children, and meeting them was one of the most powerful and memorable experiences of our trip; we played with the youngest children and helped them eat supper, before playing football, netball and other games with the older ones outside.

It was back to work on Monday and we managed to make incredible progress on our projects in those few days. My group decided to study young people‘s access to employment in South Africa and the role of social capital and education, and we managed to conduct focus group interviews with two groups of unemployed young people in Pretoria. Hearing about their realities and struggle was an unbelievably informative and different experience for us, at the same time as we were able to draw out some commonalities with the issue closer to home. We managed to analyze some very interesting themes from the interviews and presented these to the group on Wednesday, while the other groups presented projects from video-interviews on campus about social stigma to quantitative analyses of satisfaction with democracy in southern Africa.

The team watching as each group presented the projects they worked on over the week.

During the week, we also got the chance to explore Soweto, visit Nelson Mandela‘s house and the Apartheid Museum and have some great, traditional African food; all of which really helped us get a sense of the rich history and unique culture of the place. A few of us even had the chance to visit Cape Town afterwards, but that‘s another story! Thank you to the SCDTP for organizing this amazing trip, and to the universities and our good friends in Johannesburg for hosting us!