Ben Brindle is an SCDTP-funded student on the MSc Social Research Methods at the University of Southampton, and part of the Global Economies and Business Innovation Thematic Cluster Pathway. His PhD in Economics will explore the impact of immigration on wages in the UK occupations classified by the Office for National Statistics as low-skilled. Other research interests include environmental economics and development in emerging economies. Ben currently works as an Associate Lecturer at the University of Brighton and has previously written for The Times in both the Business and Register sections of the paper.

Since the financial crisis, workers have seen their wages adjusted for inflation grow sluggishly, with forecasts from the Office for National Statistics suggesting the average UK worker will earn less in 2021 than in 2008. One of the key reasons cited for this stagnation has been the rapid rise in immigration over the past two decades. Net migration rose from 48,000 in 1997 to 248,000 in 2016 (although peaking at 333,000 in 2015).

The argument that immigration depresses wages for UK natives has even been made by Theresa May and Jeremy Corbyn. However, the reality is more complex, and this is why:

Firstly, we need to understand the theory behind the claim. As Blau and Mackie (2017) show, if the quantity of labour employed in the domestic economy is currently at­­ Q1­­, an influx of migrant 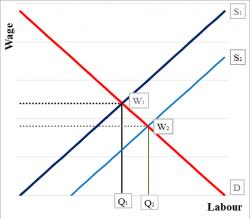 labour will increase the size of the available labour force to Q2 and, in turn, increase the level of competition between workers. Employers are now able to “play off” the labour force and hire labour at a lower level of wages (W2 rather than W1­­­­).

This model, however, is rather simplistic and doesn’t tell the whole story. While it is plausible that immigration could put a downward pressure on wages in the short run, in the long run the labour market could adjust in one, or several, ways.

Firstly, whereas the model suggests that there are a fixed number of jobs in the economy that an ever growing labour force must compete for, as Dustmann et al (2008) point out, the reality is that the number of jobs could increase. This could be caused by firms, induced by lower wage rates, changing their production methods or entering the industry and increasing the demand for labour (pushing up wages). It could even be caused by migrants themselves who, Reed and Latorre (2009) point out, are consumers and spend money on local goods and services. This pumps up demand in the economy and creates new jobs.

Interregional mobility, whereby immigrants that come to a region simply push natives onwards elsewhere, is another mechanism through which the labour market may adjust. This internal migration, which is particularly strong in the Southern regions where immigration from abroad is concentrated, has the effect of reducing the supply of labour in a region and diffusing wage impacts.

The time it takes for these labour market adjustments to occur is determined by wider economic conditions. Employers will readily recruit to expand their production in periods of economic expansion but will be more reluctant in periods of recession, for example. The highly flexible nature of the UK labour market – only less flexible than the US and Canadian labour markets – is also influential, and suggests that adjustments will occur swiftly.

But even the short term wage impacts could be mitigated. Firstly, wages are sticky: they respond slowly to changes in a firm or the wider economy (such as changes triggered by immigration) and so may not fall before adjustments take place. There may be legislation in place, such as the Minimum Wage which acts as a price floor and stops wages falling below a certain point, regardless of any downward pressure caused by immigration.

The imperfect substitutability between migrants and natives is another factor that plays an important role. This refers to the idea that because migrants and natives have different skills, levels of education, and experience, the two groups aren’t in direct competition. In fact, Manacorda, et al. (2006) found that this lack of substitutability meant the only group whose wages are affected by immigration are migrants that are already here, while Nathan (2011) discovered that migrants fill the jobs at the bottom of the labour market, meaning natives can move up the jobs hierarchy into occupations with higher wages.

After considering all of the wider influences (which are omitted from the supply shock model and public debate on immigration) it is no surprise that study after study finds wage impacts to be miniscule or, in most cases, non-existent. It is crucial that these facts reach the public debate sooner rather than later, because if the government’s objective to reduce net migration to 100,000, an arbitrary number, remains in place, it could, according to Jonathan Portes, reduce UK productivity and GDP per capita by 1 to 3 per cent by 2030. Far from immigration depressing wages for natives, reducing immigration could depress natives’ wages.